If you have not heard, the phenomenal cloud base SaaS password manager, LastPass has agreed to be acquired be the not so customer friendly LogMeIn. The IT world immediately panned the anti-idea as anti-consumer and the security world agreed and raised all sorts of red flags as well.

People dislike LogMeIn for a variety of reasons but the main one is that they pulled the rugs out from under a lot of folks who were using LogMeIn to help administer remote computers (I was one of these people). LogMeIn rapidly increased pricing on their services making their product go from consumer to “prosumer” to full blown enterprise pricing very quickly. Some people didn’t have time to get something else installed on the systems they were administering with LogMeIn before their service was cut.

Given the LastPass business model (free to consumers, premium (power users; like me) at $12/year, and enterprise, at most, $24/user/year) folks are rightfully fearful that a massive price jump is coming faster than you can get your data out of LastPass.

The response from LastPass has been a lot of damage control it would seem. But, their comment on LinkedIn really sums up the LastPass response: 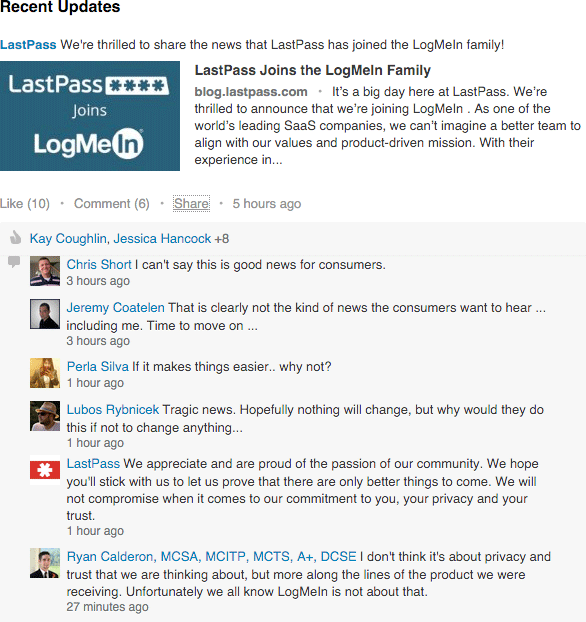 We appreciate and are proud of the passion of our community. We hope you’ll stick with us to let us prove that there are only better things to come. We will not compromise when it comes to our commitment to you, your privacy and your trust. -LastPass

In a lunchtime update to the original LastPass statement, Joe Siegrist, CEO of LastPass wrote, “[W]e (LogMeIn/LastPass) have no plans to change our existing business model.” Siegrist continues with some damage control, “It is also important to note that the current LastPass team is staying in place and remains committed to deliver on the promise of privacy, security and convenience that has been our mission since day one.”

It remains to be seen whether or not LastPass will be torn apart by LogMeIn. There are going to be a lot of people that are not going to wait around to find out. People abandoning ship is bad for investors in LastPass given the deal that was struck with LogMeIn:

Transaction Details: Under the terms of the transaction, LogMeIn will pay $110 million in cash for all outstanding equity interests in LastPass upon close, with up to an additional $15 million in cash payable in contingent payments expected to be paid to equity holders and key employees of LastPass upon the achievement of certain milestone and retention targets over the two-year period following the closing of the transaction.

Essentially, $15 million dollars is on the line based on LastPass retention targets. If today is any indication, investors in LastPass will be out $15 million due to their retention numbers dipping heavily pre-acquisition.

The clock is likely ticking for LastPass users to find an alternative option. The chances of the product being the same great universal password management and security tool that it is today two years from now is pretty low if LogMeIn’s track record has anything to say about it. I will be researching options this weekend and I’ve already pulled a backup out of LastPass for safe keeping.