I try to keep the content tech related around here but some times an event triggers a fond memory in your past and you feel the need to write about it. In January 2010, I was in the Air Force and had the opportunity to get up earlier in the morning than normal to get on a bus and drive over to Welcome, North Carolina. For those of you that are not familiar with NASCAR, Welcome, NC is the home of Richard Childress Racing. Richard Childress Racing (RCR) at that point in time had an affiliation with a group on Pope Air Force Base and Fort Bragg to bring active duty military members over, give them a tour of the museum and workshops, treat them to lunch, and meet some of the staff at RCR.

If the event just was a tour of the museum and facilities it would had been well worth it. The museum tour was quite impressive. Vehicles from Mr. Childress, through Dale Earnhardt, and up to their current NASCAR drivers were there to see and touch. The RCR team members took us in the fabrication shop, the Earnhardt Childress Racing engine shop, and several other shops showing us the flow of operations there at RCR.

We were then led upstairs to a large open room where numerous tables and chairs were setup. We all sat down and waited a little bit. Then in comes a smorgasbord of world renowned Lexington, NC barbecue. We were fed quite well and treated with an unprecedented level of respect. An RCR staff member came around and handed out holographic Kevin Harvick hero cards. The hero card was a nice piece of memorabilia from the day. A door opens off to the side of the room and in walks Richard Childress himself.

Mr. Childress had a grin on his face that said it all. You could tell he was very happy to be there. He introduced himself and gave us a speech about freedom and how important we were to him and the folks there at RCR. What he did next was quite impressive. He was given a handful of Sharpies while some RCR staff members got us up to form a line. He signed everyone’s hero cards and he even signed a couple of diecasts a friend of mine had brought with him. I was beside myself, here was a very busy man running a multi-million dollar operational carving out a big part of his own and his staffs’ time to treat us like royalty. I could not thank Mr. Childress enough when I got the opportunity to meet him. 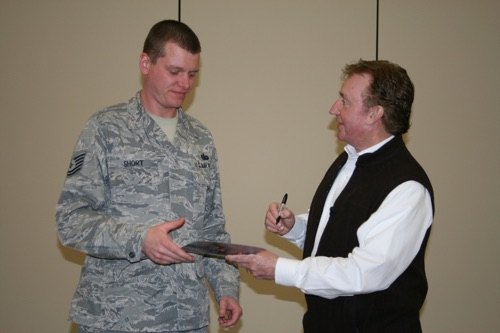 The NASCAR Hall of Fame announced its 2017 inductees this week. While I am sure some people will argue the timing of Mr. Childress’s induction against the other eligible people, there is no doubt in my mind that it is very well deserved. Mr. Childress has done amazing things in NASCAR and for our nation’s servicemen and women.

It turns out that later in 2010 I found out I was going to be medically separated from the US Air Force. The trip to Richard Childress Racing is one of the coolest things I ever had the opportunity to do during my time at Pope Air Force Base. I often think back on that day. 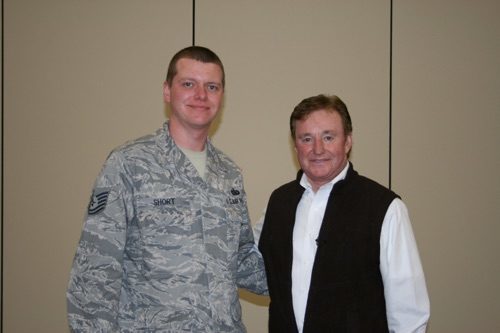