If you’ve never heard of Gina Elise and her project Pin Ups for Vets prepare to become very informed and amazed. Gina Elise is a 24-year-old who majored in theater at UCLA. It’s not often that someone of Gina’s age gets interested in helping people. It’s even less often that someone from the state of California actively supports veterans and our troops like she does. Gina Elise is not your ordinary California girl, college graduate and with her Pin Ups for Vets calendars, specifically designed for troops and veterans, she is supporting the troops overseas, downrange, and veterans recovering here at home. 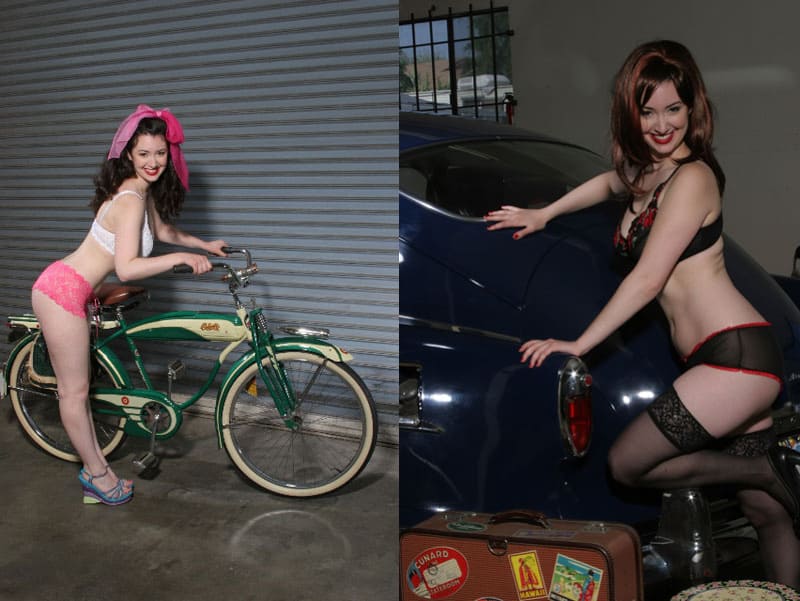 A year ago Gina Elise decided to take her, “love for retro and do something to help injured soldiers at the same time.” Gina told me that the inspiration for Pin Ups for Vets is, “The stories I hear about injured soldiers returning home from overseas really has a huge effect on me. Their lives have changed forever because of these injuries — because they served our country. The motivation and energy they have is inspiring to me. I want to do something for them.”

Gina Elise is supported by American Legion Post 360 in Lake Arrowhead, CA and makes calendars that she models in; the proceeds from which go to VA programs such as eyeglasses for Veterans, the home health program, recreational therapy, spinal cord injury & amputee programs, substance abuse program, women’s Veterans’ program, homeless program, reading materials and subscriptions for the Veterans, social relief fund, televisions, wheelchairs, and outreach programs for the visually impaired. She poses for each month in a World War II kind of retro look because Gina says she is a, “HUGE fan of all things retro. I’ve been a performer my entire life — love costumes, anything from another time period.” I’m just glad she decided to grace our time period with her looks (she’s a looker, ain’t she, fellas), grace, and caring nature.

Gina Elise has a member of the Greatest Generation in her family. Her grandfather took up arms during another tumultuous time in America’s great history, World War II. Gina has sent her calendars to, “MANY APO addresses. Iraq, Afghanistan, United Arab Emirates, Australia, Denmark, Canada, the list goes on and on,” supporting our nation’s current generation which is trying to rid the world of terrorism. “I am working with a couple that sends 200 care packages a month to Iraq. When someone specifies on the order that they want it to go to a deployed soldier, that’s how I get it out there. It’s just a matter of people choosing that option. Lately, everyone has been buying a calendar for themselves! Of course, the proceeds go to the VA.” But, Gina doesn’t sit back, model, and go to the post office she visits injured vets too.

“I have made deliveries to the VA. I’ve had an incredible response from soldiers and the vets in the hospitals love the calendar. It’s SO special delivering the donated calendars to them.” Gina told me during our interview, “Over the last month, I have been corresponding with a Marine Captain from San Diego who invited me to a medical holding platoon. My goal was to get fifty-five donated calendars for the 55 Wounded Warriors there. I JUST reached that goal so I am going to deliver those calendars.”

When I asked how many calendars Gina had sold through Pin Ups for Vets I was a little stunned when she told me, “About 270.” When I asked why so few, Gina told me, “I think its just a matter of people not knowing. No national publications that I’ve written to have covered it.” I find that surprising but given the fact that the main stream media likes to focus on the negative things in life it’s not surprising that, “the LA Times, NY Times, New Yorker, Oprah, Letterman, and Leno,” haven’t responded to her calls for help. It’s amazing that so many people have thanked Gina Elise, “you should see the hundreds of thank you notes I’ve received from ALL over the world,” but no one wants to help her help the troops.

I shouldn’t say no one supports Gina Elise’s Pin Ups for Vets though, “If it weren’t for bloggers and the blog readers the project would not have been as successful. This is where I received the majority of support and sales. I want to thank all of them.”

I’ve already ordered my Pin Ups for Vets calendar and you should definitely buy one for yourself and send a few overseas. I’m positive no one will be disappointed.